Abortion
Support
“I support a woman’s right to choose. I support it’s a constitutional right. I’ve supported it and I will continue to support it and I will, in fact, move as president to see to it that the Congress legislates that that is the laws as well.”

Assault Weapons Ban
Support
“If we cannot rise to meet this moment, it won’t just be a political failure. It will be a moral one. It will mean that we accept the next inevitable tragedy” “That we are desensitized to children running from schools and bodies littering parking lots, that our outpouring of thoughts and prayers will grow increasingly hollow.”

Climate Change
Believes
“The effects of climate change are real and must be acted on.”

DACA
Support
“These kids have come, they’ve done well, most of these kids — there’s a lot of them . . . they in fact have done very, very well,” Biden said. “In many cases, they’re more American than most Americans are because they have done well in school. They believe the basic principles that we all share. I think they should, in fact, put on a path to citizenship.”

Electoral College
Support
“That structural change requires constitutional amendments””It raises problems that are more damaging than the problem that exists.”

Free College
Support
“Bernie has put forward a plan that would make public colleges and universities free for families whose income is below $125,000” “It’s a good idea, and after consideration, I am proud to add it to my platform.”

Filibuster
Support
“I do not support ending the filibuster.” 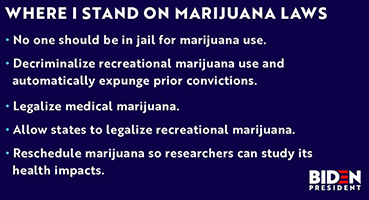 Net Neutrality
Support
“Joe Biden supports net neutrality. He was proud to see the FCC take direct action to protect consumers and innovators by preserving the open internet during the Obama-Biden Administration. Like most Americans, Joe Biden was outraged that the Trump administration reversed the Open Internet Rule and inflated this nation’s digital divide,””

Reparations
Supports Study
“There is a study being suggested by a former presidential candidate and a guy who’s a friend of mine from New Jersey, saying we should study reparations and make a judgment whether or not what they should be and what they should do …  and I support that study — let’s see where that takes us,

Second Iraq War
Supported
“I do not believe this is a rush to war,” Biden said a few days before the vote. “I believe it is a march to peace and security. I believe that failure to overwhelmingly support this resolution is likely to enhance the prospects that war will occur …”

Stop & Frisk
Oppose
“I believe the practice of detaining, questioning, and molesting civilians is completely ridiculous”“It’s classic bloated government. Why not skip to the fun part? Why not just ‘frisk’?”

Universal Healthcare
Build on Obamacare
“adding a public option to Obamacare as the best way to lower costs and cover everyone.”